andreajs354 (or Andreas for short) is Albert's Target on ROBLOX LUMBER TYCOON, the only video of Albert he appears. He is very popular that he appeared in Temprist's Halloween Special in 2020.

Andreas is a smart person for an Roblox starter, he is Albert's ''Friend'' on ROBLOX LUMBER TYCOON, he tricked Albert when he was going to drive andreas with him in the car, Andreas is too much powerful that he made Kaden's car fly, after throwing Kaden's car, Andreas stands there and waits for Albert pick him up with his car, He also apppears as an Ghost/Robot in Temprist's video of Halloween 2020, where Albert also appears. 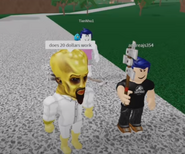