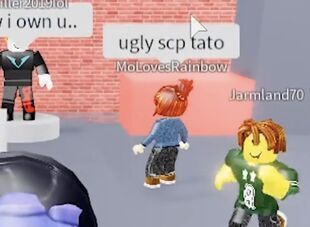 When Albert was in a Rap Battles game, a person named MoLovesRainbow said Tato Ugly Scp, as well as scp ugly tato and ugly scp tato, but then corrected the famous lines and said Ugly Scp Tato. When Albert was up against somebody, Albert started to spam Ugly Scp Tato and won the rap battle even though the original creator got mad at him.

In ROBLOX ALBERT SCP FACILITY... Albert plays a fanmade game called Ugly Scp Tato Facility. In the game, it parodies the SCP-genre of containing creatures. The creatures here are SCP-650, Green Screen Man, and Su tart. The game was named after the famous meme that MoLovesRainbow created.

Community content is available under CC-BY-SA unless otherwise noted.
Advertisement